During the NCAA basketball tournament I often think back on my playing days. My playing days in basketball consisted of trying to make my junior high team, getting cut and then finding some other sports that seem to fit my abilities a little bit better.

What drew me to basketball? Most of the cool guys or who I thought was cool played at that time. They had lots of adoring fans, yes, even in junior high. Girls seemed to like basketball players. I could go on. But as a coach in this work life I just cannot get enough of the mentality of coaching. I hear coaches talk and they (men and women coaches) often say things that make me think or make me realize a deficiency I have and need to correct, none more so than John Wooden.

One of the great things to watch is how coaches get the most out of their teams, how those stories develop, how Competitive Greatness seems to be part of the results for every great team, every Cinderella story. It’s also intriguing to find out how some of the top talents and talented teams don’t seem to be in sync, how talent may not be the only ingredient to success. 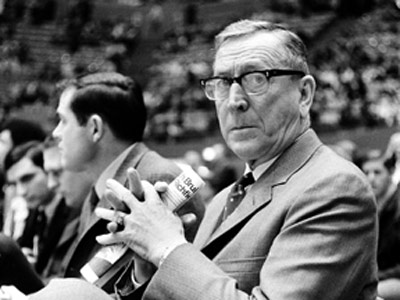 So my NCAA bracket this year and every year just goes back to John Wooden. His Pyramid of Success transcends basketball. It’s my NCAA bracket every year because you cannot every learn it all. One of the core principles of success – Cooperation. He says: “Have the utmost concern for what’s right rather than who’s right.”

In working with executives in career transition I have learned what works and what doesn’t. I don’t have all the lessons and strategies but I do understand the attitude of cooperation it takes to win and work together.

Here are three attitudes or ways that your lack of cooperation can defeat an effective coaching strategy:

1. Don’t Coach Me. Some people don’t want someone else to “tell them what to do” and you will hear these words from this type of person. They aren’t “coachable” in a sense. Have you ever tried to give someone, including a close client, advice that they refused to hear?

2. I Know What I Am Doing. When you work on a team and don’t collaborate with others it hurts everyone. But when, often in the heat of the moment, you exclaim this kind of line you instantly exclude others. Often, people around you want to help but when you want it to be just you then “the team” will often let you fail and the team will fail along with you.

3. I Am Better Than You. A person who exudes this attitude asks others to complete them so they can show everyone how good they are in every situation. This person often challenges the advice of other good advisors, team members and coaches. They don’t compliment ideas but they have to better those ideas with their own, not occasionally, but almost all the time. Have you ever been on a team with this prima donna type? It’s excruciating.

The best performers make mistakes in all of these areas but the most coachable people among us help create great teams and the kinds of atmosphere it takes to reach Wooden’s Competitive Greatness.

John Wooden gets the last word:

“Always seek to find the best way rather than insisting on your way.”