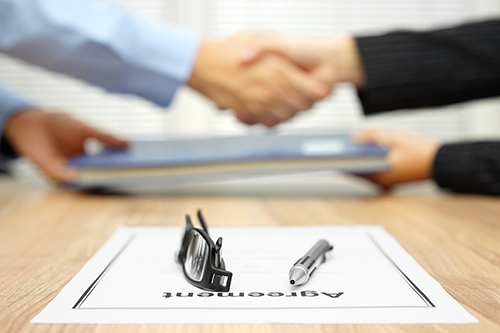 Cheshire Parker Schneider and Bryan’s family law lawyer Jenny Bradley shared insights on mediation, negotiation techniques and working with high conflict people at the CareerPro Inc. Executive meeting. Bradley: “The human brain has three ‘layers’; a reptile brain, an Inside Out brain, a primate brain.” Citing her core education and training in psychology, each brain state so to speak affects the way individuals deal with other people and issues. People tend to gravitate to what is safe, familiar and known. Bradley said fear prevents people from experiencing the unknown and causes them to “dig in their trench.”

As a result of many negotiations, mediations and the harsh realities of family law, Jenny Bradley obtains insights daily on human interaction and negotiations. She goes on: “The reptile brain state is purely for survival, fight or flight,” Bradley explains. “If this is happening in the law, at work or in a job search negotiation if the reptile brain is in play people may not be aware of what you are saying to them.”

The next phase, the emotional state, people are more concerned with being heard than listening. Bradley explains this state by comparing it to Pixar’s Inside Out. “They wear their emotions on their sleeve.”

The third brain layer is the primate state. According to Bradley, this allows for logic and reasoning between two negotiating parties. Bradley emphasized that as a family mediator, she has to be careful not to get drawn into the first and second states. “There is no reasoning with them; your emotions can’t override theirs. It is easier to be a mediator instead of actively negotiating with the opposite party.”

The rules change with bullies and narcissists, Bradley explains. The former can’t shift between layers (personality disorder) and the latter will never admit they are at fault, to a narcissist, everything is considered a mortal wound when scrutinized. In the book High Conflict People in legal disputes, Bill Eddy recognizes patterns that Bradley simplifies clearly and states: “The level of cost of conflict is not based on the issues or on the amount of money involved: personalities drive conflict.”

In Bradley’s paradigm she says “I get people out of the first two ‘layers’ by letting them vent and asking open ended questions. I had people tell me the ideal [situation] would be the other person dying. That’s not realistic. I let them pursue and visualize this scenario by asking, ‘what does being the only parent look like?’ or ‘do you believe that?’ Get them talking and thinking, not feeling”

When mediating, Bradley said it is important for both parties to feel respected by the mediator. “I do it by listening without prejudging. Sometimes you think ‘oh, this person is a jerk’ but those thoughts can be detected nonverbally.”

Bradley’s mediating philosophy is blunt and straightforward. At one of Bradley’s mediations, the lawyer opposite was being unreasonably difficult. “It couldn’t be about me or her. The goal is to find a solution to a couple’s problem. On top of that, custody of the children was being fought over.”

“I think of mediation like stacking bricks. Find the common ground where you can,” Bradley said. “When the couple get stuck and arguing over an issue, have them agree there is a problem that needs to be addressed and table it for another time.”

Her advice is decisive and based on many real situations. In the world of working within HCP’s or High Conflict Personalities as Bill Eddy defines in his book there are a myriad of issues that can be going on behind the scenes and internally with people, including Cognitive Disorientations that include traumatic early life experience, biological predisposition and learning self-defeating lessons. No matter, Bradley’s advice rings true in her 18 year family law practice.

Jenny Bradley: “When dealing with high conflict people remember, be brief, be informative, and never apologize to them.” More later from the frontlines but for now consider this in your next line of negotiations and communications.