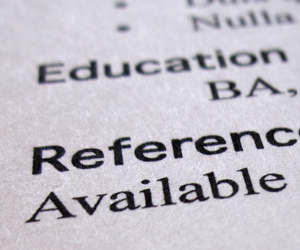 Reference checks can confirm or deny the value of a job seeker to a potential employer. It’s simply not enough to have written references on LinkedIn or click through keywords on LinkedIn. Whether you are in career transition you need people who advocate for you and recommend you to companies, customers and employers. These people should bring career credibility from professional and volunteer assignments and bring current credibility to your value proposition.

They can be the difference maker in your advancement and employment. When it comes to references, do sweat the small stuff. That means you do the basics like keeping them informed, copying them on your career moves, staying in touch at least quarterly, asking them to enthusiastically support you. Choosing a reference who can talk about your “work” but who is lukewarm about you as a person outside of work may not be a good choice.

For a real-life illustration of a reference’s importance, consider “Alex’s” example:

“Alex Partain” thought his resume and interviews went well with a Fortune 100 technology company. Even in the great recession, he blew past most of his friends and secured seven interviews, including final-stage interviews at five companies. Information security positions pay well over $100,000, and with a solid background in the very latest in information security, why shouldn’t the offers flow? But what happened next left Alex in the lurch, confused and looking for answers.

“I honestly could not believe it,” Alex says now. “I got a serious wake-up call about references. It probably cost me thousands upon thousands of dollars in terms of months lost. I lost out on every single interview I had secured in a mere month. It wasn’t until a third-party recruiter ferreted out the facts about my references that I found out what was going on. What was happening was basically my own hand-picked references were not prepared properly, did not give me glowing reviews and hurt me. But all in all, it was more my fault then theirs. I did not prepare them or myself.”

Here is what happened. He gave his two weeks’ notice, but left his company two weeks before one of the company’s most important engagements. He provided his references the proper notice they needed to prepare a quick, positive paragraph on company letterhead and write a sentence or two on LinkedIn. But that wasn’t all. Mr. Partain left his current company with a bit of a cloud over his head. “I left them a little short on a key project. That left my key references a bit angry.”

After Mr. Partain hired an employment-law attorney who checks references, he found out three cold, hard and interview-busting facts about his references:

Fact No. 1: Unprepared references can unknowingly discredit your work on projects.

His first and key reference talked glowingly about his work but then undercut him by challenging his work on a key project. “My own CIO at my company actually disputed two facts on my resume! When one of the reference checkers called, he found out that I had given him an old version of a resume,” said Alex.

“He really did not know that I handled the fix of a very large financial institution in the way I did. So he said that I had not participated in the project. He suggested that – and it ended up looking like – I lied on my resume without saying explicitly that I lied. To my own discredit, I never gave him a copy of my new resume, and because I was in such a rush to bail out of the company, I just did not communicate what I actually had done in the last part of my tenure.”

Lesson: Do not assume anything.

Closely coach and counsel your references to ensure you both agree on what will be said if someone calls. Get agreement on key achievements and resume points. Make sure you take time to copy the reference on your latest resume.

Fact No. 2: The impression a reference leaves will be reflected upon you.

The third-listed reference was just totally lukewarm, monotone and even said, “I have no comment” a few times during the reference checker’s interview with him. Though in person the reference was like a comedian – with really dark humor, a funny and fun guy – he was a total dud as a reference.

Then he told a bad joke about Alex and said, “I can tell you he didn’t kill anyone while he was here,” and that was it.

Some references never even returned the employer’s call when Alex listed home and work numbers instead of cell phone numbers. One telephone number the reference checker called went to the desk of another senior manager on the West Coast, who had essentially lost out on a promotion to Alex seven years earlier. The guy said, “You don’t want to know what I think. I could tell some things off the record.” But upon follow-up he said, “No comment,” and reluctantly gave up the number to the correct employee.

As a foundation to your overall reference plan, get written references in Word and create a PDF. Allow references to work with you on the content. Consult your career coach on the content that may work for you. Don’t just rely on the LinkedIn recommendation even though that helps. As an option, you can offer to write the recommendation as long as they agree with the information and essentially sign off on the reference letter. By doing this, you have a proactive way to combat a reference who is less than prepared, distracted or unenthusiastic on the phone. Ideally your reference will advocate for your over the phone, in person and in writing.

Remember to get permission from your former human resources department to provide you with your employment evaluations. In fact, you can – and probably should – find out exactly what your current and former employer’s reference policy is. Written information can be a powerful testimonial and may negate more lengthy phone calls to your current references.

Also, ask your reference how she would like to be contacted by a future employer or anyone who wants to talk to them – at home (not desirable), by cell (ideal), by text (to get them to call) or by e-mail (okay for more formality).

Incorrect cell phone numbers will waste time and hurt your credibility. Even with a correct phone number, if a reference calls and does not respond quickly it can hurt you. It shows she may not care enough to respond quickly or give you high marks. Silence can be deadly here. Lack of enthusiasm hurts too.

Fact No. 3: If it’s a legal issue, investigate legal avenues.

Frustrated, Mr. Partain sought the advice of several attorneys, but nothing that was said about him was essentially false or malicious. He didn’t have grounds for a lawsuit or the time or money to pursue one. Instead he corrected his own mistakes and actions. “I am not going to even say that hiring an employment-law attorney is right or wrong or hiring a reference-checking service is the way to go. I do know I should not have been so hasty in drawing up my references. And I shouldn’t have assumed that my references would do what I wanted them to do.”

What can you do if you feel your references are derailing your career options?

If you truly feel that your background and job search is being compromised by knowingly misleading, malicious or false information, then you may want to hire an attorney or consider legal action. First choice is always to contact your former employer and reference and try to resolve any bad blood or issues upfront, before you start your interview processes. Consider all your options but start with preventive reference medicine first: prepping references with current resumes and getting written references (LinkedIn and in separate Word/PDF documents) and contact information that includes their work and cell phone.

Aggressive lawyer letters may silence your references completely and shave important time off your job search. A lawsuit could tie up lots of time and resources you may not have during an earnest job search. And what if a so-called bad reference’s statements are justified? Before a lawsuit, find out what you and your reference agree on.

Do what you should do to anticipate how important references become in your search. They are important. Silence and mere neutrality can be fatal in the world of references. Your investment of time, energy and preparation for interviews should not be derailed by bad, lukewarm or silent references. Do what Alex Partain should have done. Don’t get off-track during your next, critical career move. Be proactive and prepared when it comes to references. Inform them, nurture them and keep them close at hand.

Read how job search references can derail your career >